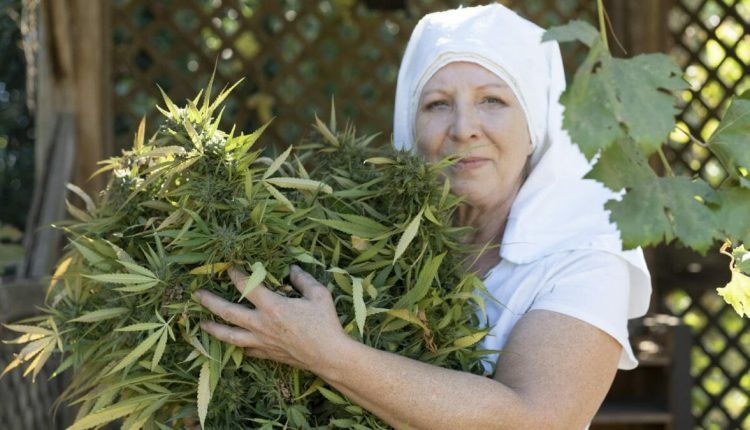 Sisters of the Valley
BusinessCannabis

Sister Kate wants to establish a new age religion on a cannabis farm.

Christine Meeusen is not your average nun. For the past six years, Meeusen, who now goes by Sister Kate, has been growing cannabis on a one-acre plot of land in Merced, California.

Cannabis is not just a cash crop for Sister Kate, but a means for good. She wants to establish a new age religion focused on healing with sustainably made plant-based medicine and lifting women out of poverty.

“We connect the dots between the last time it was legal for native people to put Mother Earth at the center of their spiritual practices, before cannabis and holistic medicine was demonized, before women’s bodies were regulated,” she says. “The sisterhood is an antidote to the fact that women suffer the brunt of all poverty and coincidentally since Christianity became the only religion that was legal.”

Sister Kate established her sisterhood, Sisters of the Valley, in 2015 after a series of life changing events. First, she went through what she says was a devastating divorce in 2008 that left her penniless and briefly homeless as a single mother raising three children. She started growing her own food and cannabis in her backyard to become self-sufficient. In 2014, she decided to produce cannabis-based tinctures and salves to support herself. At the same time, she began attending Occupy movement protests, wearing a nun’s costume. When people asked her what exactly she stood for, she told them and she says they encouraged her to formalize her beliefs.

Then in 2016, Sister Kate started growing cannabis and making products using Cannabidiol, or CBD, such as oils and teas on her farm while subscribing to a code of values that she says is loosely based on the Beguines religious orders of the Middle Ages. The Beguines were one of the earliest examples of feminism. The Beguines did not abide by the rules of the time that required women to live under the guardianship of a man. They were not bound by permanent vows like Catholic nuns, as they were not part of the Catholic Church. Women could enter their order with children and leave if they wanted to marry. They all lived together for the purpose of economic self-sufficiency and dedicated themselves to God and acts of good service.

“We are walking and marching into a world where we will have weed nuns in every province on the planet and every county and province in the world,” Sister Kate says. “When people see us in our veils they will know what we represent just like they do [when] a fireman [is] in his uniform.”

Currently, 25 sisters and five brothers are part of Sisters of the Valley worldwide, selling their products in places as far as New Zealand, Mexico, Denmark and Brazil. In order to be part of the sisterhood, sisters and brothers have to generate revenue from the products. There are also about two years of training, which involves participating in a fellowship program, answering an in-depth survey and reading a copy of the Book of the New Beguines. A variety of the sisters and brothers are involved in various advocacy efforts surrounding women’s rights and the legalization of cannabis in their communities, so that they can establish their own farms instead of importing from Sister Kate’s crop.

While the COVID-19 has dented the sisterhood’s sales, Sister Kate is hopeful that her army of new age nuns can brave the storm and come out as a better business when the pandemic is over. In addition to expanding her sisterhood, she says she’d like to start growing medicinal mushrooms and certain types of roots. She also dreams of establishing a rescue hotline for women who are facing homelessness, abuse or any other type of crisis. The idea is that eventually, Sisters of the Valley can additionally provide a number of social services.

“We’re small right now, but we’ve got big dreams… If someone would have just come and cared [for me], it would have made a whole big difference to me and to the many women who experience being ‘throw away’ women,” Sister Kate says. “When you give a woman a better quality of life, they take the men with them. Women do not leave men behind the way a patriarchal society leaves women behind. It just isn’t going to happen.”