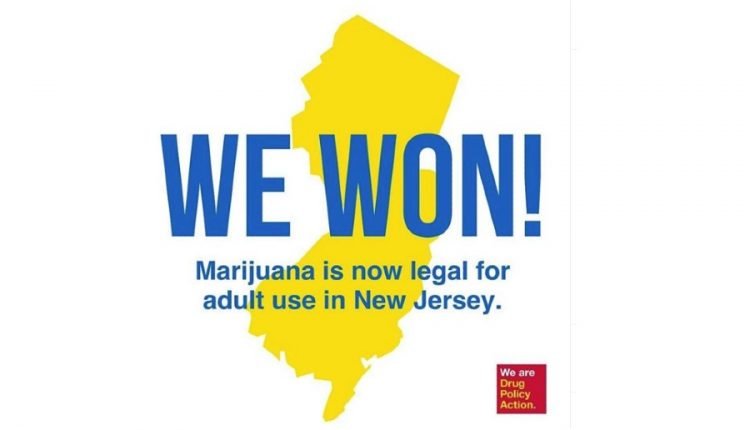 New Jersey voters overwhelmingly backed a ballot question Tuesday permitting the possession, sale and use of marijuana for adults 21 and over, getting behind a measure long sought by social justice activists.

The Associated Press called the race just after 9:30 p.m. As of Wednesday morning, results showed about 67% of New Jerseyans voting for and 33% voting against legalization, with 63% of votes counted.

According to the Associated Press, the ballot question was approved by voters in all 21 counties.

“We did it, New Jersey,” Gov. Phil Murphy tweeted. “Public Question #1 to legalize adult-use marijuana passed overwhelmingly tonight, a huge step forward for racial and social justice and our economy.”

“This is what we’ve been working for. I think the results speak for themselves,” said Axel Owen, campaign manager for NJ CAN 2020, the “vote yes” campaign. “This was a mandate from the people of New Jersey that they want to see a legalized cannabis market in New Jersey. We’re very encouraged and excited.”

All election results are preliminary and the final tally could change. The results released by election officials are based on ballots received as of Election Day.

Mail-in ballots still in transit and provisional ballots cast on Election Day won’t be counted until next week, at the earliest.

The New Jersey ballot question asked voters to legalize cannabis and allow the state to set up a network of dispensaries, which would sell marijuana products only to adults 21 years old or older.

Purchases would be taxed at the state sales tax rate, currently 6.625%, and an additional 2% tax rate levied by municipalities where the purchases occur.

If no additional taxes are levied, New Jersey would have the lowest legal weed tax rate in the United States.

But those purchases could be over a year away. Unlike other states to legalize weed on the ballot, New Jersey’s ballot question did not include regulatory framework.

Instead, it leaves those decisions up to the Legislature and Cannabis Regulatory Commission, a panel established to oversee the state’s emerging medical marijuana market that will now be tasked with recreational marijuana, as well.

Marijuana legalization has been framed as a once-in-a-generation criminal justice reform in New Jersey, where police officers are tougher on marijuana crimes than any other state and Black people are 3.5 times more likely to be arrested for possession than white people, despite similar usage rates.

Advertisements released by NJ CAN 2020, the “vote yes” campaign, also described marijuana legalization as a chance to free up police resources, shifting the estimated $134 million spent on marijuana arrests to preventing and solving violent crimes.

Social justice advocates have called for Black entrepreneurs — especially those arrested for marijuana crimes — and predominantly Black neighborhoods get preferential treatment when the resulting legal weed industry is established.

And while the issue didn’t become the media free-for-all as it has in other states, legalization supporters outraised their opponents by a 156-to-1 margin, $2.1 million to less than $10,000, according to campaign finance reports.

“We are not done. I believe most people probably thought they were decriminalizing —not necessarily legalizing — marijuana,” Sabet said. “You will see some of the same people who voted for this will stand with us to stop pot shops in their communities. They will also stand with us as we pressure the legislature into making regulations that can at least partially protect public health.

“We will continue to work with those who have been with us since the start to monitor and expose New Jersey’s marijuana industry at every turn. The fight for public health and safety is never over.”

Even with voter approval, one of three things must happen before marijuana users can light up at home without fear of arrest. The Legislature must pass either enabling legislation — which would formally direct law enforcement to stop arresting people for marijuana possession — or a decriminalization bill.

An alternative, which could happen shortly after results are certified, is a directive from the Attorney General’s Office ordering police to stop arresting people under existing marijuana laws.

Sen. Nick Scutari, D-Union, said he expects to introduce a decriminalization bill soon after results are certified that would stop arrests until full enabling legislation — which would set up the framework of how the legal weed system work — is passed, likely by the end of the month.

“The whole overarching theory is that social and criminal justice reform is at the heart of this,” Scutari said.

That “theory” has been called into question by legal weed opponents, particularly Black lawmakers from urban areas who have accused supporters of pushing through an economics-driven policy under a veil of social justice.